Chagall Windows at the Hadassah Hospital

The beauty of the Chagall Windows, the light they emanate and the perfection of Chagall’s work will be found at Hadassah Hospital in Ein Kerem, Jerusalem.

The twelve stained glass windows were created by the famous Jewish-French artist, Russian born Marc Chagall (1887-1985) as a present to the State of Israel and the Jewish People.

Visit Chagal windows on a private tour of Jerusalem

Chagall windows in Jerusalem Representing the Twelve Tribes of Israel

Most of the people who visit the site are not seeking medical treatment nor do they come to pray. They come in great numbers just to see this world-renowned work of art.

These sets of windows made of stainless steel and measures approximately 3.5 m by 2.5 meters represent the Twelve Tribes of Israel that entered the Land of Israel under the leadership of Joshua.

They have arranged three windows on each side in the following order: Reuben, Simeon, and Levy on the east; Judah, Zebulon and Issachar on the south; Dan Gad and Asher on the west and Naphtali, Joseph and Benjamin of the northern wall.

The entire window’s art is based on Jacob’s final blessing and in the same order, they were mentioned. In some of the windows appear some texts taken from the Book of Genesis. 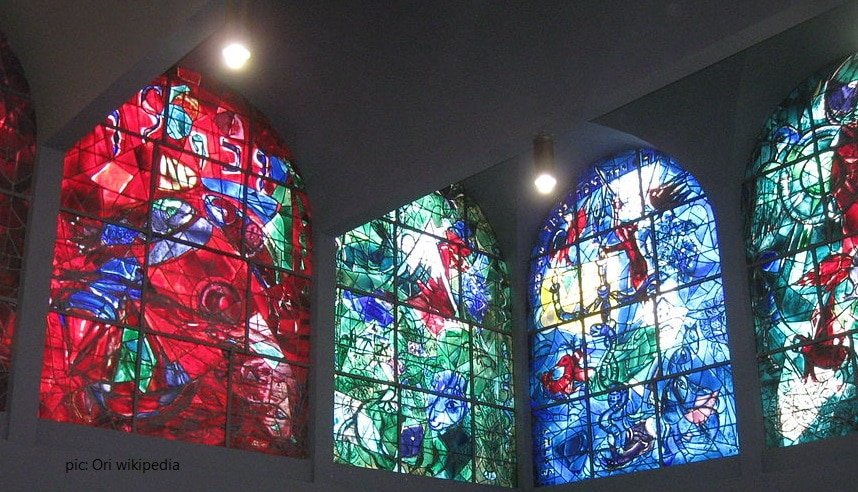 Chagall was French, born in Russia and above all a Good Jew

Chagall, always interested in religious themes did windows works in many churches in Europe.  The Church of Assy was consecrated in 1950 and he did his work in 1957. The Metz Cathedral boasts many large windows. In this case, he cooperated with local artisans called Charles and Brigitte Marq.

In 1959 the then National President of Hadassah, Dr. Miriam Freund together with Joseph Neufeld, the architect of the newly built Hadassah Medical Hospital in Ein Kerem Jerusalem commissioned the team of Marc Chagall and the Marq team to create the windows of the Medical Center’s Synagogue.

“All the time I was working, I felt my mother and father looking over my shoulder; and behind them were Jews, millions of other vanished Jews of yesterday and a thousand years ago,”

It was a great undertaking for Chagall his first work of art in the newly established State of Israel. The twelve windows have to sum up to the totality of the Jewish People. He did many drawings and always took into consideration not to depict human images in a Synagogue. Here is when he used his famous hybrid characters like fish, horses, birds, bulls, and goats that took human attributes.

The Chapel is built in a way that the twelve windows allow the light to glow through them in an incredible dance of colors. If you are going to pray in the Abbell Synagogue, it will be difficult to concentrate in prayer, unless you absorb the beauty that surrounds you, close your eyes and lift your spirit. The sun filtering through this array of colors will overwhelm you.

In all of Chagall’s works including this one, you may feel the love for his people and his identification with Jewish History and his memories of life in the Old Shtetl in Russia. 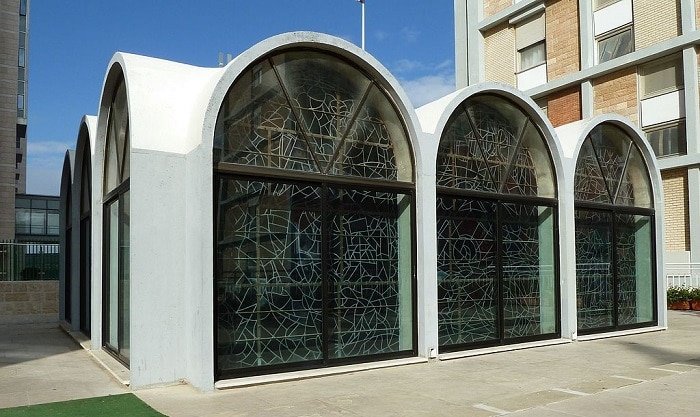 It took Chagall and Marq two years to finish the project. In the process, they developed the use of many colors in one pane as opposed to the previous technique of having to separate each color pane by a lead strip.

On February 6, 1962, during the celebrations of Hadassah’s 50th Anniversary, the Synagogue was dedicated in the presence of the artist Marc Chagall.

Don’t miss the Chagall Windows on your next trip to Jerusalem. Even if you are not in the praying mood, a visit to the Synagogue of the Hadassah Medical Center is a must.