Caesarea – Phoenician, Roman, Crusaders, and Byzantines all loved this place.

Caesarea National Park, on the Mediterranean coast between Tel Aviv and Haifa, has everything. An old Phoenician Harbor, well-preserved ruins of the Roman capital of the Judean Province, a walled crusader castle and much more. A visit to Caesarea teaches us a huge amount about the history of the Holy Land.

The first settlers were the Phoenicians who built a port and settlement called Straton’s Tower. The Phoenicians built a number of ports along the eastern Mediterranean Sea. 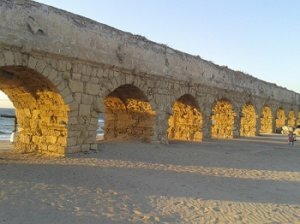 This area came into its own under King Herod who built a large artificial port, a Palace and all the other public buildings associated with Roman culture, Public baths, a theater, a hippodrome, temples and public toilets with running water. Caesarea became the capital of the Judean Province at a time that coincides with Jewish upheavals and the birth of Christianity. Therefore many historic events are connected to Caesarea. The beginning of the Jewish revolt in 66 A.D., Pontius Pilate ruled from Caesarea (you can even see a stone with his name from that era), Paul of Tarsus was imprisoned here and then sailed from the port to Rome to stand trial, the ten famous Jewish sages, including Rabbi Akiva and Rabbi Simon ben Gamliel were put to death here.

With the decline of Rome and the ascendance of Islam, Caesarea became a decaying ruin but the Crusaders conquered the region and built a very European like fort complete with a moat (although the moat was always dry).

The Mamluks recaptured and destroyed the city in 1265, and it remained abandoned until the late 19th century when a group of Bosnian Moslem fishermen settled in the ruins and stayed up to 1948.

Extensive archeological excavations have revealed much of the splendor of Caesarea including the amphitheater, the bathhouses, exquisite mosaic floors, Roman public toilets, the crusader’s fort and the theater which is in use again for a variety of performances and concerts.

Phoenic means palm tree in Latin because the first thing that the Romans saw of the settlements from the sea was the palm trees. But Phoenix is also a bird. The connection is that both the bird and the tree arise from the ashes. Yes, you cannot destroy a palm tree by fire.